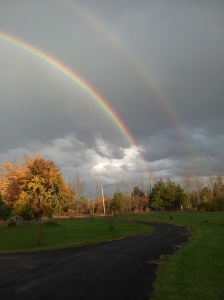 I love food. When I talk to my family, at some point in the conversation, a recent, memorable meal or a special recipe will come up, and we’re off on the food tangent for twenty minutes. I remember what I ate for lunch at a special event eight years ago, or all the restaurants we went to when we visited Sicily. (That guy I just met ten minutes ago? No clue what his name is.)
Smells are also often evocative. Suntan lotion (Coppertone, of course) will always bring me back to May, 1989, and lying on the beach with an evil hangover after our musical’s cast party of the night before. To this day, the smell of Southern Comfort sends me running to the bathroom.
But it’s music, more than anything else, that transports me. My “formative musical years” are basically 1977 to 2001. From ’77 to about ’82, I was heavily influenced by what my parents were listening to: Rod Stewart, (made-up dance routine to “Do You Think I’m Sexy”…at age seven…) Gordon Lightfoot, Roger Whittaker, ABBA. That music is long car trips, jammed with my siblings in the back of my dad’s convertible du jour. Usually to Ohio. From Florida.
Roger Whittaker was my first concert. With my mom. I got to wear a pair of her heels, and I felt totally grown-up. I think I was eleven. Say what you will, I still love all of that music.
Shortly after that concert, though, I began my own musical awakening. Van Halen, (1984) The Police, (Synchronicity) Madonna, (“Borderline”) and Chicago (“You’re the Inspiration”) were on the radio as I entered adolescence. “Jump” and Journey’s “Don’t Stop Believin'” will always be me and Christy, leaping off the ottoman during our dance routines, singing into our brushes.
As things got more emotionally complicated, it was music that sang my feelings. Phil Collins’ “Against All Odds” was, I was sure, written for me after my first big break-up. “I Can Dream About You” by Dan Hartman was definitely written about that unobtainable Senior I had a huge crush on. Depeche Mode existed to let me safely plumb the depths of my darker side. Metallica and the Violent Femmes helped me scream out my rebellious side.
The ’80’s are my era, no doubt. But the ’90’s are the background music to my exploration of what being a woman would mean. Tori Amos, Sarah McLachlan, Madonna (still)–they were singing about things I was trying to navigate as a twenty-something newly launched into the grown-up career world, (sans boyfriend).
Don Henley’s “Boys of Summer” will always be a drive up A1A in Florida, around midnight. Sunroof and windows open, warm and salty ocean breeze, cigarette resting lightly between first and second fingers of my left hand. I have just left a party where, for the first time, I realized I could have had my pick of guys. And chose to leave alone.
And, well, on that note: Nine Inch Nails’ “Get Down, Make Love” still has the ability to make me cross-eyed with lust.
The thing about music, about lyrics, is that they speak to us; often, they speak to us when we are at our most vulnerable. That emotional memory stays embedded in the sensory bank that is our brain, and the opening notes of the music rushes us back to that time, that place.
I’ve often heard people lament that the world has no need for poetry anymore, as we race head-long into making money, face-down onto our electronic devices. But I’m not worried.
As long as there are people feeling things they can’t or won’t talk about, who are connecting with the lyrics and rhythms of music, we will all be pulled in by poetry. As long as there are lyricists who are willing to write about the things we feel most deeply, and singers to add the layered emotion of sounds to those words, poetry will be there.
Music, more than anything else, has the power to transport me.

3 thoughts on “Music, more than anything else”

From My Garden To Your Table

A Raisin & A Porpoise
Paper and Salt

stories, pictures and cooking tales from an english woman living in rome.

Style and a Half

It was all fun and games, until the fisticuffs and shenanigans... -Deutschmarc

by po'E.T. and the colors of pi

Line Of The Week

a verbal exercise in breathing

everything has got taste

"When words become unclear, I shall focus with photographs. When images become inadequate, I shall be content with silence." ~Ansel Adams